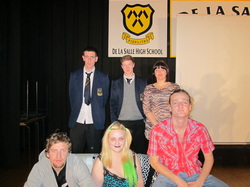 This play was gripping and entertaining stuff right from the start. It was based on the exploits of four university students from very different backgrounds living in a house in their first year. The characters were down to earth and totally believable, especially Tim as he used some phrases that only people from Northern Ireland would say and relate to.

The play was comical from the start however it tackled the serious issues of drugs and the temptations that can occur in young people’s lives. The play showed university is fun where you can get a lot of life experiences relating to all sorts of things, but that you have to work and study hard if you want to achieve your goals. It also highlighted the simple and more serious distractions that can occur along the way, such as the drugs issue, without being condescending.

The final message of the play shown through the characters of Alison and Casper, highlighted the notion that you only have to touch drugs  such as methodrone once to end up in a dangerous if not fatal situation. The fact that Alison was against drugs from the start makes the message all the more powerful. To understand what I mean I recommend you see the play for yourself.